Workshop The Benefit of the Doubt 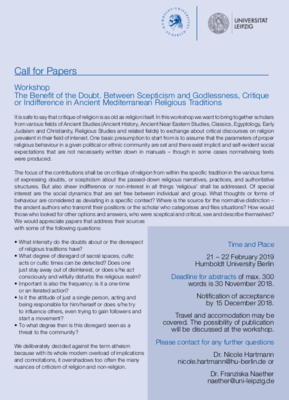 Workshop The Benefit of the Doubt. Between Scepticism and Godlessness, Critique or Indifference in Ancient Mediterranean Religious Traditions

It is safe to say that critique of religion is as old as religion itself. In this workshop we want to bring together scholars from various fields of Ancient Studies (Ancient History, Ancient Near Eastern Studies, Classics, Egyptology, Early Judaism and Christianity, Religious Studies and related fields)to exchange about critical discourses on religion prevalent in their field of interest. One basic presumption to start from is to assume that the parameters of proper religious behaviour in a given political or ethnic community are set and there exist implicit and self-evident social expectations that are not necessarily written down in manuals – though in some cases normativising texts were produced.

The focus of the contributions shall be on critique of religion from within the specific tradition in the various forms of expressing doubts, or scepticism about the passed-down religious narratives, practices, and authoritative structures. But also sheer indifference or non-interest in all things ‘religious’ shall be addressed. Of special interest are the social dynamics that are set free between individual and group. What thoughts or forms of behaviour are considered as deviating in a specific context? Where is the source for the normative distinction – the ancient authors who transmit their positions or the scholar who categorises and files situations? How would those who looked for other options and answers, who were sceptical and critical, see and describe themselves? We would appreciate papers that address their sources with some of the following questions:

We deliberately decided against the term atheism because with its whole modern overload of implications and connotations, it overshadows too often the many nuances of criticism of religion and non-religion.

The workshop will be conducted in English and take place at the Humboldt University Berlin at February 21-22, 2019. Papers should be 45 minutes total (please allow 30 mins for the paper and 15 mins for discussion). Please submit your abstract (max. 300 words) till November 30, 2018 to Dr. Nicole Hartmann (nicole.hartmann @remove-this.hu-berlin.de) or Dr. Franziska Naether (naether @remove-this.uni-leipzig.de) or contact us for any further questions. Scholars selected to give papers will be informed by December 15, 2018. Travel and accomodation may be covered. The possibility of publication will be discussed at the workshop.